A study was carried out to investigate whether there is a relationship between the percent of hearing loss and the volume at which people typically listen to music. Ten high school students agreed to participate in a study. Each was given a music player with headphones and was asked to listen to music for 10 minutes. The students were told to adjust the volume to a comfortable setting. After 10 minutes, the volume setting, which ranges from 1 to 10, was observed for each student. Each student then took a hearing test, and a measure of hearing loss (in percent) was recorded. The data are shown in the table below.

(a)  Construct an appropriate graphical display that allows you to investigate the relationship between volume setting and hearing loss.

(b)  Based on the graphical display, describe the relationship between volume setting and hearing loss.

(c)  From this study, is it reasonable to conclude that listening to music at a high volume causes hearing loss? Explain why or why not.

Part (a):
An ideal response to part (a) includes a correctly drawn scatterplot of the data that includes axis labels, correct scales, and points.

Histograms and dotplots are not appropriate for bivariate data, and student responses that use these (or other one-variable graphical displays) are considered incorrect.

Part (b):
An ideal response to part (b) notes that the relationship between volume setting and hearing loss is 1) approximately linear, 2) strong, 3) positive, and 4) makes these statements in context (e.g., higher values of hearing loss tend to be paired with higher volume settings). If a response is missing one or two of these four elements, it is considered partially correct. If it is missing more than two, it is considered incorrect.

Part (c):
An ideal response to part (c) indicates that it is not reasonable to conclude that listening to music at high volume is the cause of hearing loss and provides an explanation that is linked to the study design. This might be done by indicating that the students participated in an observational study and cause-ad-effect conclusions can't be drawn from an observational study or by indicating that to reach a cause-and-effect conclusion requires a well-designed experiment. It is also possible to provide an explanation based on the fact that there may be confounding variables in an observational study, as long as this explanation includes how this might have occurred in the context of the study described. 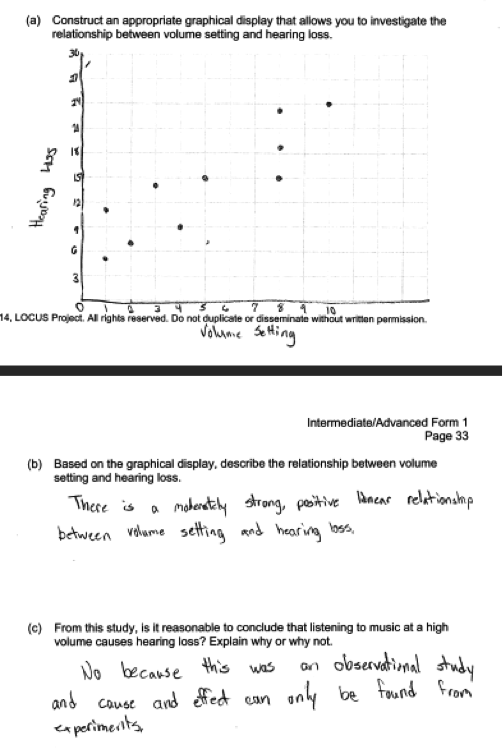 There are a number of ways that a student could demonstrate understanding of the concepts assessed in part (c).  For example, the following responses were all scored as essentially correct for part (c):

The following response was scored as partially correct for part (c) because while the statement is true (i.e., a correct definition), there is no explanation of why not as prompted by the question. Another type of example that falls into this category are statements that said that there might be confounding variables but did not give an example of how this might limit the ability to draw a cause-and-effect conclusion in the context of this question.

Part (a) asked students to create a graphical display of the bivariate data.

Most students recognized that the given data were bivariate and correctly chose to make a scatterplot in part (a). The most common error made by students who did not construct a scatterplot was to try to use a graphical display that is designed for univariate data rather than bivariate data. For example, some students tried to make a histogram or bar chart, as illustrated in the student response below. When selecting a graphical display, students should think about both the data type (categorical, numerical) and the number of variables. 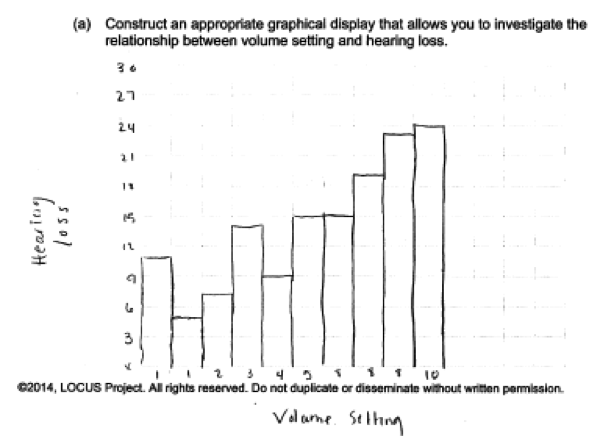 Part (b) asked students to interpret the graphical display of bivariate data.

Two common student mistakes in part (b) were to only address the direction of the relationship in the response (omitting strength and form) and/or to give a response that was not in the context of the problem. When interpreting results or providing explanations, students should always reference the context.

The following student response to part (b) indicates direction (increasing, positive) in context, but does not address the linear trend or strength of the relationship, and was scored as partially correct.

While it is true that a larger sample size would be desirable, the small sample size is not the reason that a cause-and-effect conclusion cannot be drawn. Similarly, while a study that involved randomly selecting participants from some larger group would allow generalization of the findings of the study, this is not a reason that a cause-and-effect conclusion cannot be drawn. It would be possible to design an experiment that used volunteers to investigate the effect of sound volume on hearing, but this would require random assignment of volunteers to sound volume groups as well as looking at exposure to loud volumes over time as hearing loss is not instantaneous.

Another error in thinking is seen in the response that follows. In this response, the student believes that any cause-and-effect relationship would have to be deterministic, which is not always the case.

Finally, some students erroneously justified their response to part (c) based on personal beliefs without using the given data or the answers given in parts (a) and (b), as illustrated in the following response. 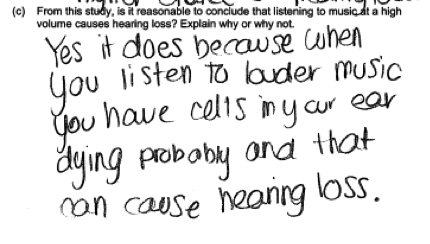 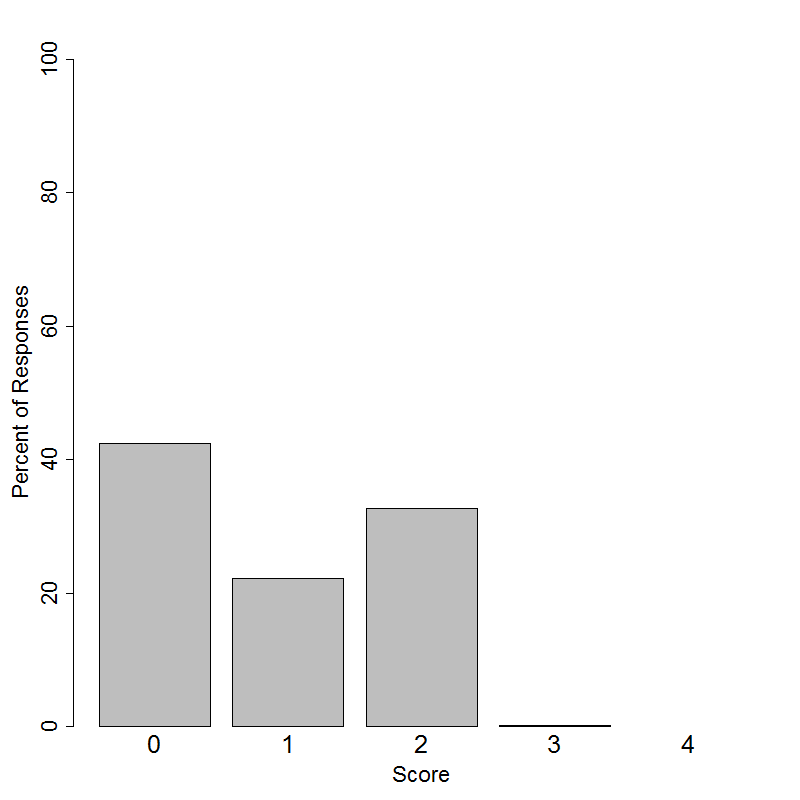 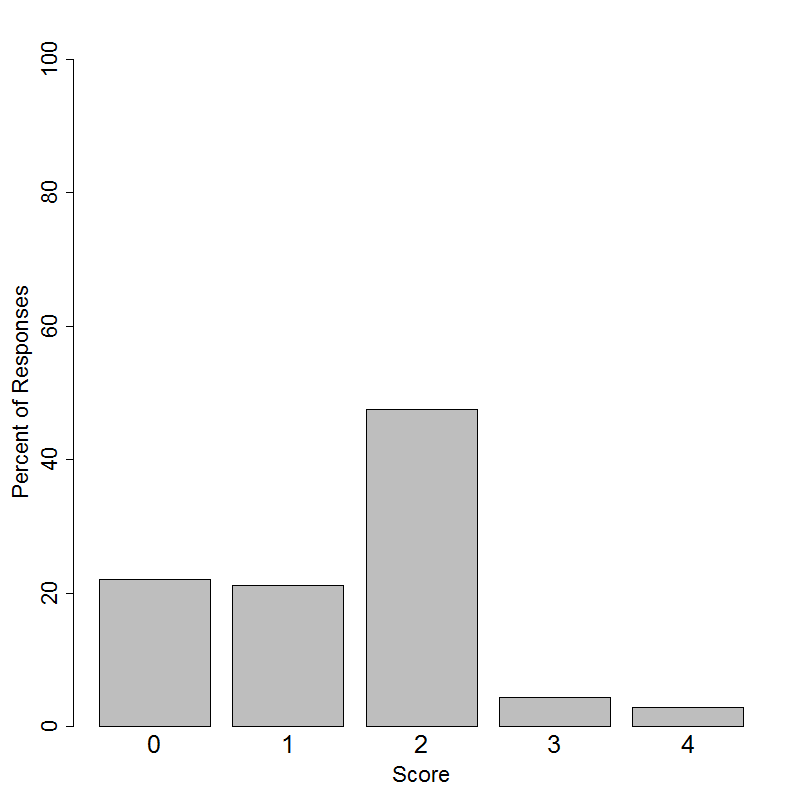 Study design and the conclusions that can be drawn from various types of studies is an important concept in the development of students’ statistical literacy.

More information about this topic can be found in the following resources.

Illustrative Mathematics has peer-reviewed tasks that are indexed by Common Core Standard. Standard S.IC.3 is relevant to the issue of distinguishing between observational studies and experiments and the types of conclusions that can be drawn in each case. Two tasks relevant to this standard are

Published by the American statistical Association and freely available online, this document contains a discussion of observational studies and experiments on pages 52 – 55.

Other Resources from the American Statistical Association

Making Sense of Statistical Studies is a collection of investigations suitable for classroom use. The Introduction provides an overview of the statistical problem solving process and includes a discussion of observational studies and experiments.

The NCTM publication Developing Essential Understanding of Statistics for Teaching Mathematics in Grades 9 – 12 includes a section on the big idea “Importance of the Data Collection Method” in the discussion on pages 57 – 66.